Almost uniformly law firms highlight the most demanding and complex (and high fee generating) work they undertake. This is designed to position firms as they wish to be perceived and reassure potential clients about their capabilities.

Many firms do indeed undertake at least some highly complex, demanding (and sometimes newsworthy) work which generates high fees and of which quite rightly they are particularly proud.  Unfortunately, this can be over-emphasized, contributing to a belief within the firm that a high proportion of its work is or should be of this nature. This in turn leads firms to operate business models which align with that kind of work – with, for example, a strong focus on partners undertaking work, low leverage, and a limited focus on work process efficiency, knowledge capture, and the like. The assumption is that the firm is largely undertaking one-off, complex matters where high levels of partner input are essential and process streamlining is not a priority as the work undertaken is of a nature that is not suited to delegation nor is it regularly repeated.

The reality in many, many firms however is that such matters are an extremely small proportion of the work they undertake. In fact, the majority of work undertaken is just the opposite – of relatively low monetary value in terms of fees per matter (and often per client too) and repeatedly undertaken.

Typically, our analyses show that around two-thirds of a firm’s clients generate as little as 10% of its total revenue and an even smaller percentage of profit, while just 5% of its clients are contributing around a half of the firm’s revenue. And this split tends to be even more marked at the matter level. 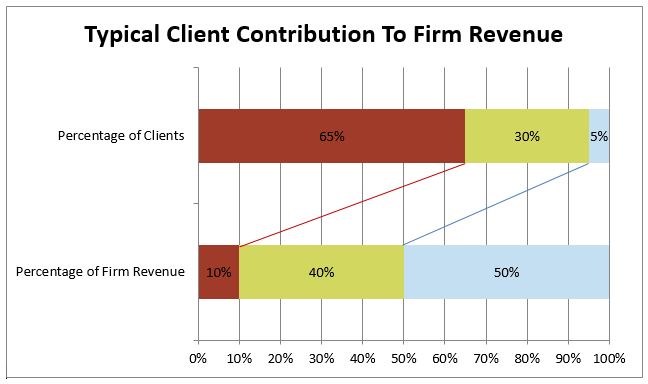 Interestingly we find this across all types of firms: in small and medium-sized ones largely acting at a local or regional level, in niche practices acting at a national level and through to large international firms acting in multiple jurisdictions and with many offices. Of course, there are exceptions, but in firm after firm we find that the significant majority of work undertaken is relatively low value in terms of fees per matter and in aggregate it contributes relatively little to total revenue.

Such analyses are very straight-forward to undertake – as a first step it simply involves ordering the clients (or matters) by fees generated from smallest to highest and then calculating the total revenue by each decile. Further analyses can then be undertaken depending on what this initial assessment shows.

The large number of individually low fee generating matters tend to contribute even less to profitability – this is for a variety of reasons but a few are particularly common:

Firms that find that they do have a large proportion of individually low fee generating (and often only marginally profitable) matters should not jump to conclusions about jettisoning such work. Indeed, there are notable firms that are highly successful and profitable who specialize in such work. And many firms are simply not in a position to turn away such matters, particularly for clients who may turn to the firm for a range of work.

For firms that conclude that they wish or have to undertake such work the core issue becomes one of making it as profitable as possible. Our experience is that the profitability of such work can often be improved, and sometimes dramatically, with well designed and implemented process improvement; this may need to be fairly radical in terms of changing the level (and hence cost base) of the staff undertaking such work, moving it to lower cost locations, significant investment in IT, and so on.

For firms that decide that they wish to reduce the amount of such work undertaken there are a host of strategic, operational and financial challenges and we have worked with firms who have implemented a variety of plans including separating a segment of such work into a separate business or spinning off that work to another firm.

Where we believe real danger lies is in firms not recognizing and reacting to the reality of the work they undertake. Such firms will continue to dedicate significant resources to undertaking a relatively large volume of work which in aggregate generates limited fees, they will continue to make a marginal (at best) margin on it and find over time it has a highly detrimental strategic and financial impact on the firm overall.