The American Lawyer list of the 100 highest grossing firms in the U.S. was released a few weeks ago. The average profits per equity partner (PPEP) of the firms on the 2015 list (which reflects 2014 performance) grew 6.2% over the prior year, a significant uptick relative to the previous year-over-year growth of less than 1%. But a closer analysis of the results reveals that this average is misleading. In fact, the range of profitability performance around the average was fairly dramatic, with a surprising number of firms increasing by more than 10%, and 20 of the 100 firms either declining or increasing by less than 1%.

The following chart shows where each AmLaw 100 firm’s 2014 PPEP stood relative to each firm’s percentage growth in PPEP from 2013 to 2014. 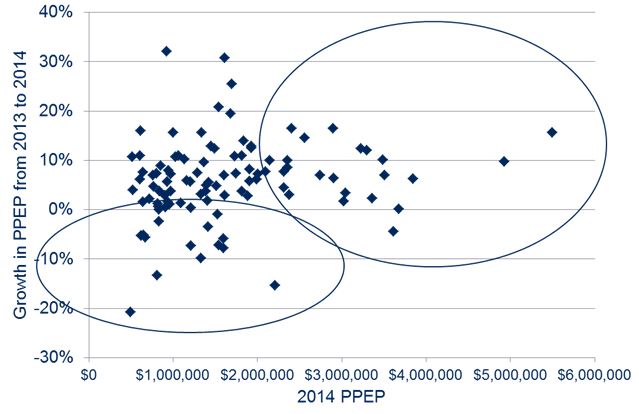 The results are interesting, and include:

The 2014 performance of firms continues a trend of significant profitability segmentation. Because the base profits at the most profitable firms are so much higher, the growth in dollars is even more dramatic and serves to drive the wedge between the highest performing firms and everyone else. The most profitable group ($2+ million) grew profits by an average of $192,000 per partner over the one year period, while the firms under $1 million added an average of $22,000 per partner. While one could certainly argue that all Am Law 100 firms are doing very well, the rich firms are indeed getting richer and widening the gap every year. The most profitable firm in this year’s AmLaw 100 earns 11 times as much per partner as the 100th firm. These dynamics play out in other global markets as well.

While the results are interesting, the real questions are around what is driving the performance gaps and what the implications of these profitability trends are. Not surprisingly there was a connection between growth in revenue per lawyer and growth in profits per equity partner (see chart below) and it is in part a pursuit of higher revenues per lawyer that drives real profitability in large law firms.

Secondly, it is reflection of the firm’s management of its resources and the strategic decisions it makes. Revenue per lawyer reflects the firm’s mix of practices and often its geographic footprint. In other research we have done we have seen that strategic focus and being “known for” a practice or practices or an industry/sector is a strong driver of revenue per lawyer and profitability. By contrast, among AmLaw 100 firms, size and profitability have almost no correlation.

Revenue per lawyer also reflects the productivity of the firm’s lawyers and the effectiveness of the firm’s performance management. Partner productivity dropped substantially post-recession and has really never recovered. While certainly billable hours are not the only measure of a partner’s value to the firm, many managing partners report that they have excess partner capacity in the firm. One recent survey reported that 61% of managing partners indicated that overcapacity is bringing down profitability (AmLaw Daily, May 12, 2015).

Effectively managing partner performance and productivity is key to growing revenue per lawyer (and therefore profits). It is important to remember that revenue per lawyer can be impacted by the firm’s leverage model – firms with a high partner mix (and resulting lower leverage) may have high RPL that does not drive profitability. The most successful firms are those who can achieve an appropriate balance of leverage and revenue per lawyer growth.

We expect the profitability variability, with some firms doing very well and others struggling, to continue in 2015 and beyond. This creates some instability in the market, which increases lateral movement and may result in some firms dissolving. Lateral movement will likely accelerate as partners look to join not just more profitable firms, but firms that are “known for” their area of practice and a destination for clients. Firm management needs to be aware of the market dynamics and make the strategic and performance management decisions that will ensure the firm’s success long term.